This essay from Energy Bulletin makes the point that "an enormous amount of fossil energy is required to manufacture, install and operate all forms of renewable energy systems. Without the input of fossil fuel the existing renewable energy projects could never have been built and could not be maintained in operation." The author, Roger Adair, who worked for ten years on wind systems in and around the British Isles, notes that renewables "are manufactured in largely fossil-fuelled factories employing tools, equipment and components produced in other fossil fuelled factories. The raw materials and components used require energy intensive extraction and fabrication techniques to produce, and along with the finished products, also have to be transported substantial distances, often by road." At any wind farm "you will find an abundant selection of fossil-fuelled giant earthmovers, cranes, cars and trucks in use. In addition enormous low loaders will be coming and going delivering massive mechanical parts, towers, nacelles, generators, gearboxes, transformers, power cables and blades from hundreds or thousands of miles away."

Adair concludes that the prospects for renewable power in a post peak oil world are very small indeed, a point also made by Jim Kunstler in his The Long Emergency. Says Adair: "Large and complex systems, particularly in remote and environmentally challenging environments such as wind farms, especially off shore, will probably be early renewable energy casualties of the decline in oil supply."

A key assumption behind proposals to reduce greenhouse emissions is that natural gas was far cleaner than either oil or coal. Coal was considered the worst offender. A new study by David R. Atkinson, Professor of Ecology & Environmental Biology at Cornell University, throws that assumption into question. "Using the best available science, we conclude that natural gas is no better than coal and may in fact be worse than coal in terms of its greenhouse gas footprint when evaluated over the time course of the next several decades."

The big culprits, according to Atkinson, are the indirect emissions of CO2 necessary to develop and use natural gas and "fugitive emissions of methane, converted to equivalent value of CO2 for global warming potential assuming a 20-year time horizon."

See also this Jan. 5, 2011 piece by Gail Tverberg ("Natural Gas: Continually Running into New Obstacles") which reports on an EPA interim report suggesting that natural gas leakage is much greater than previously estimated. Based on this tentative analysis, natural gas emissions average 3.25% of natural gas production. "At this level," according to David Lewis of the Energy Collective, "the impact of natural gas would be similar to coal."

Jan. 25, 2011: Also reporting on the new EPA study is this analysis at ProPublica.org.

February 1, 2011: This New York Times summary--"It's Not Easy Being Green"-- has more on the controversy sparked by the EPA and ProPublica reports.
Posted by DCH at 11/15/2010 No comments: Links to this post

According to the Financial Times, which received advance word of the new IEA report on world oil, Iraqi oil production will in the future be far from the 12 million barrels a day predicted by Iraqi oil authorities.


Iraq will miss its target of producing 12m barrels of oil a day by 2017 and could take another 20 years to achieve even half that level of output, says the International Energy Agency.

In a draft of its annual World Energy Outlook report, the IEA gives a downbeat assessment of Iraq’s ambitions. However, it predicts its crude oil production will overtake that of neighbouring Iran “by soon after 2015”.

Iraq has awarded licences for the development of 11 major oilfields and, if all targets are met and investment of about $150bn takes place, production should reach 12m b/d in seven years. But the IEA stresses the mammoth nature of the task, saying that the “sheer scale of the required construction of infrastructure, coupled with political uncertainties, suggests that the expansion of capacity will be much slower”.

The report notes that “basic infrastructure, including road, bridges, airports and water supply, are all in need of repairs and expansion”.

Meanwhile, Iraq’s “existing export routes are also fully utilised and a major expansion of the shipping ports will also be needed”. Taking all this into account, the IEA projects Iraqi output of 6.5m b/d in the 2030s, compared with 2.5m b/d at present.

However, the IEA also forecasts that Iraqi production will almost double in the next decade, reaching 4.8m b/d by 2020. It adds that the country will surpass Iran in terms of crude output by “soon after 2015”.

Early Warning, in a January 2010 post, gives an extensive discussion of the likelihood of an increase in Iraq production to 12 mbd. As a graph accompanying the post shows, the target entails a quadrupling of the 3mbd level reached in the late 1970s (after which war and embargo reduced production levels). 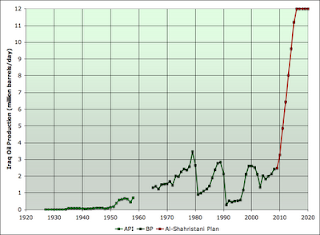 Such an increase to 12 mbd would have huge implications. Were it to occur, EW noted, it would "delay the final plateau of oil production by a decade (ballpark), make that plateau be at a higher level (95-100mbd ballpark), and significantly moderate oil prices in the meantime, with even some possibility of causing a serious breakdown of OPEC discipline and a period of significantly lower prices akin to the 1980s-1990s lull (though probably not as long or as deep a lull as that)." That, in turn, "would likely have profound consequences for alternative energy projects, biofuel companies, and automobile fuel efficiency. A period of lower oil prices will put adaptation projects on hold for the duration. . . . To use Richard Heinberg's party metaphor it's as though Dick Cheney and his crew managed to organize one last trip to the liquor store before everyone was too blind drunk to drive. Now the party can stagger on till everyone is really wasted. Sprawl in the US and Europe, sprawl-enabled-obesity, SUVs, growing Chinese auto-dependence, growing carbon emissions etc, all get a new lease on life."
Posted by DCH at 11/04/2010 No comments: Links to this post