The scale of futures trading on the oil market--and commodity markets more generally--is a novel feature of the current financial scene. According to the Financial Times, "Daily average turnover has increased from 350,000 futures contracts in 2005, when electronic trading started to dominate, to 1.5m--or 16 times the world's global daily oil demand."  Currently, funds control around 510 million barrels of oil in the New York and London futures markets--"equal to more than five days of global demand, or the combined monthly output of Saudi Arabia, Iraq and Iran, the biggest producers in OPEC." The impact of the shale revolution and fracking on the oil market is well known; less well appreciated, according to David Hufton, an oil broker, is the impact of "financialization." According to Hufton, "Futurisation of oil has been as dramatic in its impact as the arrival of horizontal drilling and fracking . . .  Fracking transformed oil supply dynamics; futurisation has transformed the factors driving oil prices." 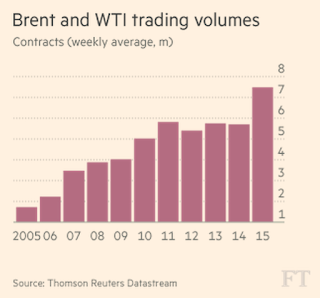 The FT piece contrasts the big movement of macro funds into oil futures with the abundance of oil in the physical market. The supply overhang is also emphasized in the following chart from Britain's Telegraph newspaper. It cites a recent oil market report from the International Energy Agency warning that over supply has reached 2.1 million barrels a day. "Iraq, Libya and Russia are all cranking up output, and Iran is waiting in the wings with an extra 400,000 b/d of quick supply if there is a nuclear deal." 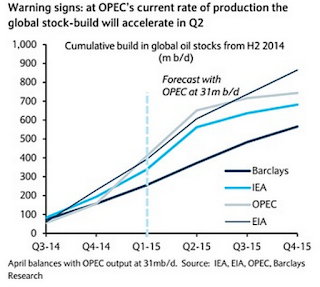 Ambrose Evans-Pritchard, "Epic global bond rout is a QE success story - but it won't last," The Telegraph, May 13, 2015 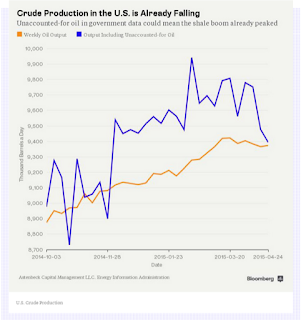 One of the most closely watched figures of late has been the weekly oil output numbers released by the Energy Information Administration. The markets have been desperate to know whether the Saudi price war would succeed in flattening the U.S. industry or at least sharply impairing its growth. And yet according to accomplished oil trader Andrew J. Hall, the published estimates are taken from state agencies and lag by several months. The numbers are “essentially an artifice.”

The chart above shows, in orange, the EIA estimates to which all the attention is usually paid, the weekly output figures. It turns out, however, that the agency itself thinks it may have a better gauge. This is represented by the blue line. (I don’t recall having ever previously seen a graphic presentation of this alternative data.)

Hall believes the recent fall in output as shown by the blue line is very bullish for the oil price, though it might be noted that the adjustments, though showing a steep fall recently, still show production above the normally consulted weekly output figure.

Bloomberg explains the basis of the different methodology:

A more accurate gauge of U.S. output is an “adjustment” the agency uses, which, in addition to the weekly number, adds up changes to how much oil is in storage, how much was used in refineries and how much was imported and exported, Hall said.

Paul Sankey, an energy analyst at Wolfe Research, also cited the trend in a report Thursday to investors. The amount of production that isn’t accounted for has fallen “dramatically” in the last two weeks, suggesting U.S. daily output may have fallen by as much as 200,000 to 300,000 barrels in April, he said. “That number seems high to us, but it does support the notion that U.S. production is rolling over at present,” said Sankey, a former analyst at the Paris-based International Energy Agency.

Imports, refinery demand and storage level data all come from surveys the EIA conducts with oil companies. Export data comes from the U.S. Census Bureau. Production data comes from a variety of sources, including state and federal regulatory agencies. In a perfect world, the supply and disposition would equal each other, said Mike Conner, a petroleum analyst at the EIA. But they often don’t, so the EIA uses the adjustment figure to balance it out. “All we really know for sure is the supply components are not enough to make up for the volume on the disposition side,” Conner said. “We don’t know if the error is in field production, imports, refinery inputs or what have you. Different analysts are going to have different interpretations.”

Update, May 12: The question of EIA statistics becomes curioser and curioser. The latest was a blast on Monday against the EIA for gross incompetence in its methods of data collection. The EIA, charged oil analyst Philip Verleger, was overestimating U.S. output by as much as 1.6 million barrels a day. The glut the markets had previously identified was seemingly non-existent, a “phantom.”  Verleger was previously on record as predicting that oil prices would fall back to $50 a barrel by the end of the year, a prediction predicated on the existence of a supply glut. So this was a big reversal for him, and it was for oil markets, if true, a very big deal.

Then today (Tuesday) came a further twist, with Verleger performing a flip-flop and saying it was all a big mistake. According to the FT, Verleger “said economists at the Federal Reserve had examined his calculations and pointed out an error.” “The effect of the error is to change the sign of the Energy Information Administration’s mis-calculation of US crude oil production,” said Verleger. “It turns out that EIA is underestimating US oil output.”

There follows the Monday story in the FT, followed by excerpts from its Tuesday report. Wednesday may bring further clarification, but it would seem, on the face of it, that the heat of Verleger’s denunciation on Monday seems rather misplaced given his reversal on Tuesday.

A prominent oil analyst has fired a broadside at the body charged with data collection on the US oil industry, saying it has probably overestimated the country's crude output by as much as 1.6m barrels a day.

Philip Verleger, an independent energy economist, claims the US Energy Information Agency (EIA) has "drastically" overestimated US oil production because it uses outdated techniques rather than data from the field,  reports Neil Hume, FT Commodities editor, in London

Mr Verleger said in a report published on Monday:

This is a large variance that could have enormous implications for the global economy. Prices will be higher because the [supply] glut was phantom. Federal Reserve policy could easily have been different had the error been understood.

The EIA, which acts as the statistical arm of the Department of Energy, declined to comment.

Mr Verleger, who runs consulting firm PKVerleger and advised both President Gerald Ford and Jimmy Carter administrations on economic and energy policy, was one of the few analysts bearish on oil before last year's dramatic collapse in prices.

Last week he forecast a further decline in prices, which have rallied sharply since reaching $40 a barrel in January.

On Monday, Brent, the international marker, was trading at $65 and the US equivalent, West Texas Intermediate, was at $59.50.

Mr Verleger said in his report:

The rise in oil prices… has baffled many who believed global stocks were surging. Global stocks would have done so had the numbers been correct.

Analysts say investors should be careful how they interpret US production statistics, in particular the EIA's weekly short-term supply numbers. This is because they are based largely on modelled estimates, not hard supply data from the field.

In a recent analysis of historical estimates against lagged production data, Citi found short-term EIA forecasts underestimated final data by as much as 200,000 b/d over the last year.

Mr Verleger has come to different conclusion but says the EIA's reliance on estimates and "failure" to make contemporaneous accuracy checks of its numbers is a "dereliction" of responsibility on the EIA's part.

He said in the report:

Rarely if ever had a US agency charged with collecting data made a miscue of this magnitude. The EIA administrator should be dismissed immediately for gross incompetency.

From the Tuesday report:

The EIA belatedly responded to Mr Verleger's report on Tuesday, saying the claim of a massive understatement of production was extremely unlikely

"Notwithstanding a widely-reported note alleging that EIA's domestic crude production data are probably overstated by 1.6m barrels a day, EIA management and staff are confident in the quality and validity of the agency's production data. Furthermore, EIA's monthly crude oil production statistics, based on official State oil and gas data have been closely aligned with the weekly estimates reported by EIA," it said in emailed comments.

"Turning to the larger items in the balance equation, EIA directly collects data on refinery crude runs, changes in crude oil stocks, and crude oil imports every week. We are confident in the quality of these data. Unless the reported runs data, the stock data, and the imports data are massively wrong, production cannot be overestimated by 1m to 1.6m b/d as alleged," it added.

In both cases, there was a big rally off the lows (December 24, 2009 and January 29, 2015), with rallies failing over the next month to surmount the level achieved in the first week's big rally, then a retest and brief penetration of the lows about six and a half weeks from the original low (February 12, 2009 and March 17, 2015). At that point a rally begins that over the next six weeks sends the price through resistance and up to a new level. Note that the new level achieved is about five or six dollars above the previous resistance (from c. 49-50 to c. 54-55 in 2009, from about 54 to 60 today).

If the past is prologue, we can expect WTIC to meander in May 2015 in the sort of way it meandered from late March to late April in 2009. That is, it would probe support on the downside, sufficiently so to trigger stops, but without breaking through for more than a few hours, followed by rallies that probe resistance on the upside, but which also fail to break resistance (60) over the next month.

The next chart gives a closer look at the price action from March 20 to May 1 in 2009. From the highs to the lows is around 6 to 7 dollars.

The next chart shows the approximate range (from 60 to around 53.5) of the price action I expect over the next month. Historical precedent suggests that the oil bulls will have to wait till June 2015 for the surge above 60, and that bears will have some opportunity over the next month, but they shouldn't get too greedy. That is my (educated) guess.

One should note that there are many differences between the overall financial and energy context in early 2009 and early 2015. The oil bottom occurred about a week after the stock market low on March 6, 2009, when it was apparent that the world economy was experiencing a deep recession (thus crushing oil demand). There is nothing like that economic backdrop today, and still the oil price has recovered (from $42 to $59). On the other hand, the Saudis were attempting to support the price in early 2009, and now they are attempting to suppress it. Despite these differences in context, it is remarkable that the first three months after the initial lows of late 2008 and early 2015 have followed a similar pattern.