Isolating the effect of such finacialization on the movement of prices is very difficult, perhaps impossible; there are invariably other factors to consider. As the BOJ economists point out, "The primary factor driving up worldwide demand for commodities has been the robust recovery of the global economy, in particular the rising demand for commodities in emerging countries."

A second cause, also emphasized by the BOJ, is globally accommodative monetary policies. With bank deposits in short term accounts earning virtually nothing, that has created an incentive for investors and speculators to put on "risk-trades" in the equity and commodity markets. So, an explicit purpose of the Federal Reserve's QE2 was to boost stock market values. QE2, or the second round of quantitative easing, entailed a commitment by the Fed to purchase $600 billion in treasury bonds, with a duration between 3 to 10 years. Since the program was announced in August 2010, both stock markets and commodity markets rose in tandem. The BOJ's bottom line in its report is to point to monetary policies as the main culprit. In contrast to the Fed, it sees a clear and direct correlation between monetary policy and commodity price inflation.
The commodity markets are different in their specific supply/demand fundamentals; the market for oil, copper, and grain, to take just three examples, are driven by varying (though not uncorrelated) factors. Clearly, the sharp rise in the oil price, beginning in January, was driven in the first instance by the revolutions in Algeria, Egypt, and Libya, suggesting to the market a potential spillover effect on the stability of the Arab world and, by extension, the Persian Gulf. Grain prices have been strongly affected by various droughts and floods over the past year. There is a big ongoing argument among copper specialists as to whether the recovery in prices (from a low of about a dollar to highs of $4.50 a pound in the spring of 2011) reflects hoarding as opposed to fundamental demand. The rally's unbelievers point to high levels of inventory, especially in China, as evidence for their theory that price will collapse in an unravelling of the speculative trade. Basically the same argument goes on in the oil and agricultural markets.
A few conclusions:

I believe the impact of financialization is real and that it does contribute to volatility. The introduction of leveraged futures trading, etfs, and other derivatives has made a big difference to the way that markets operate. There has been a dramatic expansion in the volume of trading as compared with the value of the underlying commodity. That is evident from the earlier BOJ chart  showing open interest (that is, the number of contracts outstanding) in futures markets. Bruce Kasting notes further that copper futures on the Chicago Mercantile Exchange alone (there are other important exchanges in London and Shanghai) have a financial value equal to 5.7 times total world consumption (he is using a 200 day trading year in his calculations):

Let me emphasize that these are all global commodities. There are active exchanges in many other financial centers. There are also private transactions. Finally, there are over-the-counter derivatives and ETFs for all of these commodities. The average traded volume in the US futures market(s) is an average multiple of 5-8Xs of global consumption. The total world financial turnover is at least twice and possibly 3Xs that which is evident from US futures data. (For example consider crude and London ICE trading. Recent volume in crude trading at ICE is by itself an additional 6X’s global consumption.) What this means is that a barrel of oil is traded back and forth (mostly on paper) 15-20 times before it is consumed. The sum of the global financial ins and outs for just crude would be ~$60 Trillion.

The critics of financializaiton make the basic case that the commodities markets were not built for the volumes of trading now witnessed, and that the impact of the financialization flood has on the whole been negative. It has exacerbated rather than depressed volatility. Another piece of evidence on that score, as the BOJ notes, is that the returns on commodities included in the main traded commodity indexes "have become more correlated with one another since the mid 2000s, while those on commodities not included in those indices have stayed relatively less correlated over time."

The irony is this. The introduction of these new financial instruments was predicated on the assumption that they would help markets find equilibrium; instead, they have promoted manias and crashes. The recent architecture of the financial system was built by market fundamentalists, who thought that markets were all about finding equilibrium; but designing market instruments on the assumption that markets tended toward equilibrium has increased the potency of the forces tending toward disequilibrium--that is, the capitalist system's tendency toward boom and bust.

It is true that markets are inherently subject to wild mood swings, and government policy should not try to prevent that. On the other hand, its regulatory function should be to moderate, rather than exacerbate, these swings of sentiment. Hyman Minsky's now-famous theorem about the "instability of stability" is relevant here and my point is also an illustration of his.
* * *
The classic presentation regarding the financialization of the commodity markets is by Michael Masters, in 2008 testimony before Congress. Here are a few snippets from that report:

In the early part of this decade, some institutional investors who suffered as a result of the severe equity bear market of 2000-2002, began to look to the commodity futures market as a potential new “asset class” suitable for institutional investment. While the commodities markets have always had some speculators, never before had major investment institutions seriously considered the commodities futures markets as viable for larger scale investment programs. Commodities looked attractive because they have historically been “uncorrelated,” meaning they trade inversely to fixed income and equity portfolios. Mainline financial industry consultants, who advised large institutions on portfolio allocations, suggested for the first time that investors could “buy and hold” commodities futures, just like investors previously had done with stocks and bonds. . . .

Index Speculator demand is distinctly different from Traditional Speculator demand; it arises purely from portfolio allocation decisions. When an Institutional Investor decides to allocate 2% to commodities futures, for example, they come to the market with a set amount of money. They are not concerned with the price per unit; they will buy as many futures contracts as they need,  at whatever price is necessary, until all of their money has been “put to work.” Their insensitivity to price multiplies their impact on commodity markets.

Furthermore, commodities futures markets are much smaller than the capital markets, so multi-billion-dollar allocations to commodities markets will have a far greater impact on prices. In 2004, the total value of futures contracts outstanding for all 25 index commodities amounted to only about $180 billion. Compare that with worldwide equity markets which totaled $44 trillion, or over 240 times bigger. That year, Index Speculators poured $25 billion into these markets, an amount equivalent to 14% of the total market.

It is easy to see now that traditional policy measures will not work to correct the problem created by Index Speculators, whose allocation decisions are made with little regard for the supply and demand fundamentals in the physical commodity markets. If OPEC supplies the markets with more oil, it will have little affect on Index Speculator demand for oil futures. If Americans reduce their demand through conservation measures like carpooling and using public transportation, it will have little affect on Institutional Investor demand for commodities futures.

Index Speculators’ trading strategies amount to virtual hoarding via the commodities futures markets. Institutional Investors are buying up essential items that exist in limited quantities for the sole purpose of reaping speculative profits.

Masters recommended a set of legislative reforms to deal with this, but it should also be pointed out that the market ruthlessly punished those who were "long only" in commodity futures. Exchange traded funds that had to roll over their contracts every month got severely punished not only in the collapse of commodity prices that occurred in 2008 but also in the subsequent rally. Because of the condition of "contango," in which near month futures were less than prices in the outer months, the monthly "roll" of the contract caused progressive losses for holders of these instruments. 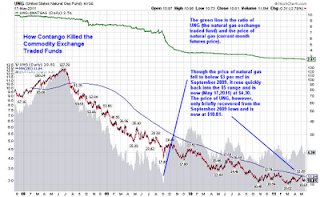 Given that producers can sell into the commodity markets to lock in profits, they are better equipped to take advantage of the passively oriented commodity investment funds; it is notorious that natural gas traders gamed that market over the last year because they could anticipate when the big funds would be forced to roll. In other words, if Masters is right, then producers have a strong incentive to sell into this artificial buying, suggesting at least a countervailing force to the distortions induced by financialization.
Posted by DCH at 5/14/2011