The Most Important Chart in Finance

The following chart shows a ratio between the SPX (the S&P 500 US stock index) and the MS World Index (an international equity index that excludes the U.S. market). It shows the dramatic disparity between the U.S. and foreign equity markets since the financial crisis and the ensuing Great Recession. As the separate price indices in the two panels below show, the world index is barely above the level it reached in 2000, whereas the S&P 500 long ago surmounted the twin peaks of 2000 and 2008. The chart supports the general conclusion that international stocks are a better bargain than domestic stocks. 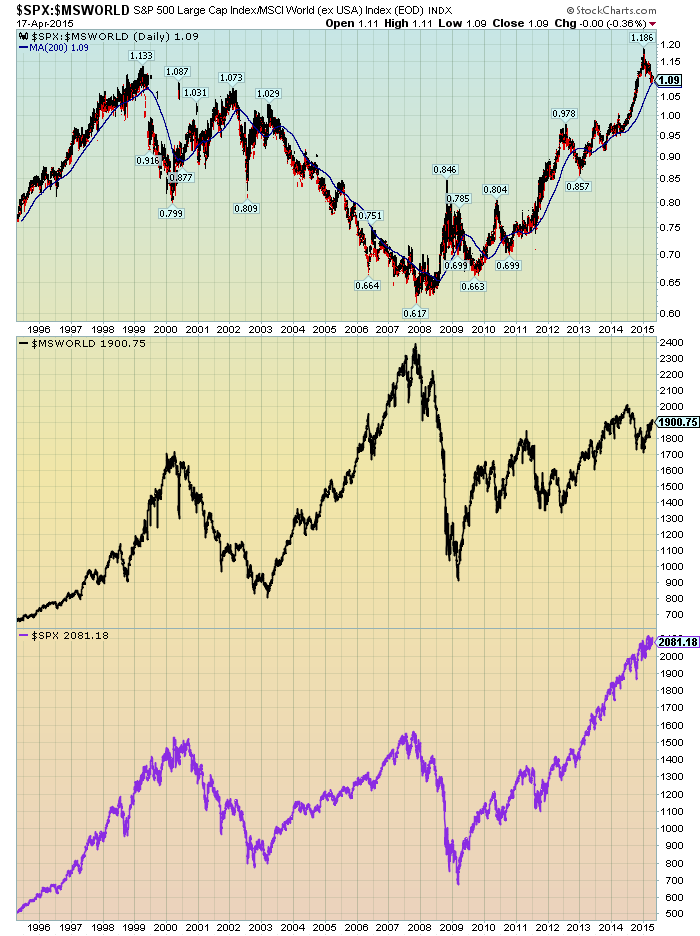 The ratio turned on or about January 1, 2015, and has barely looked back since.

Apart from the overall disparity in valuations suggested by the chart, there are additional reasons for thinking the ratio line will continue trending lower. One is the collapse in oil prices, which disproportionately benefits big oil importers (Europe, Japan, China, India). Another is the turn of world central banks to quantitative easing. QE may or may not be healthy for the overall economy, but it has undoubtedly been very, very good for U.S. equity investors. The U.S. Federal Reserve purchased $3.75 trillion of debt in its various QE programs. Observers called it the "Bernanke put," meaning that the Fed had put a floor under the stock market, but it might more justly be thought of as the "Bernanke call." The effect was to send U.S. equities into the stratosphere. The end of the U.S. program and its embrace by others (especially the Bank of Japan and the European Central Bank) is another spur to relative outperformance by the world index as against U.S. equities.

The headwinds facing U.S. equities, after so steep a climb from the pits in March 2009, are also suggested by the following chart, prepared by Absolute Strategy Research, and unveiled in a recent interview conducted by John Authers of the FT with Ian Harnett of ASR. (This is a screen shot from that interview.) 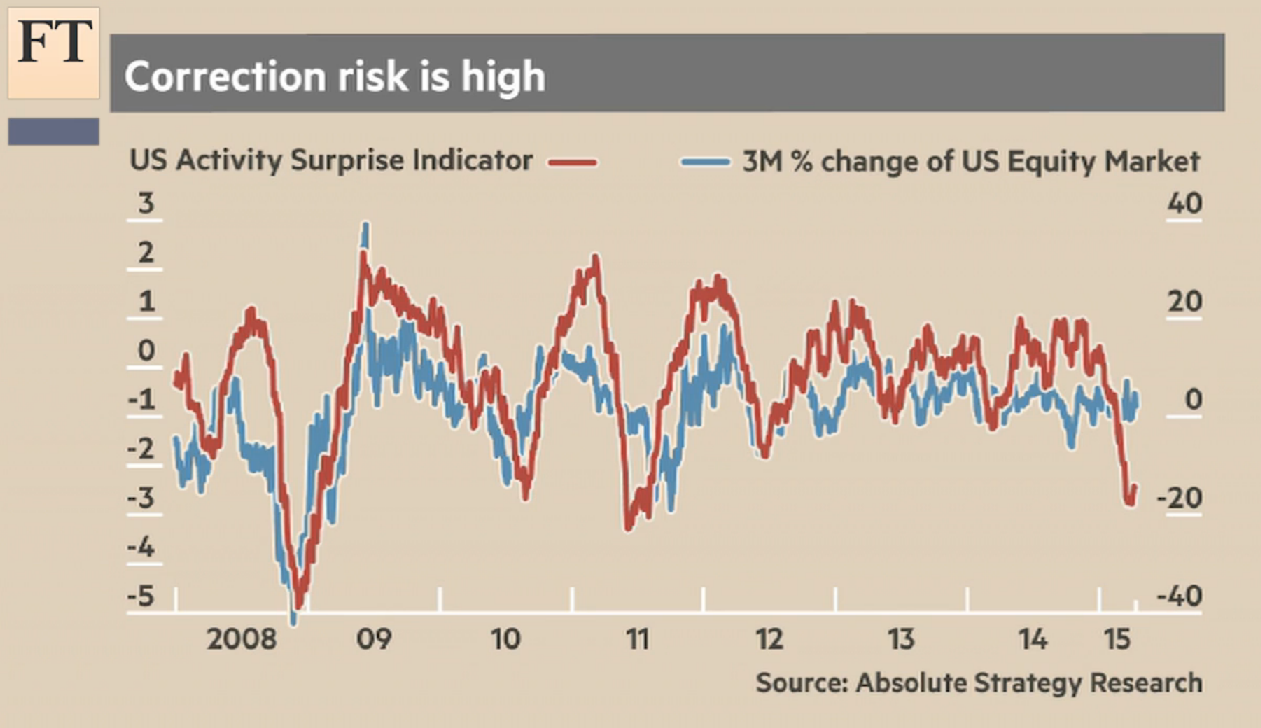 The Activity Surprise Indicator gathers all the economic numbers published daily and measures them against expectations. With the exception of the labor market numbers, says Harnett, disappointments have proliferated at a rate not seen since 2011 (the time of the last big correction in the U.S. stock market). The driving force has been the collapse in the oil price (penalizing the energy sector) and the rise in the dollar (the latter impairing the earnings of U.S. based multinationals.)

Here's another look at the disparity between U.S. and world equity indexes. EFA is the etf for the EAFE index, which covers developed markets in Europe and Asia. EEM is the etf for the stocks of emerging nations. The first chart shows the SPY:EFA ratio, the second the SPY:EEM ratio. 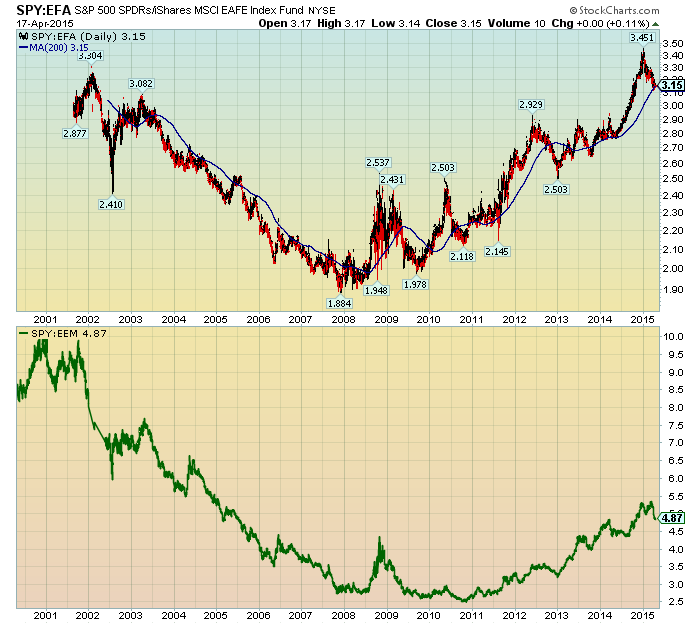 Update, 4/26/15: Underlining the disparity in valuations as between U.S. and international markets is the following statistic from Barron's: "Even when smoothing out the most recent bull market—which the Shiller CAPE (cyclically adjusted price/earnings) ratio does by averaging 10 years’ worth of earnings and adjusting for inflation—U.S. stocks seem pricey. The S&P 500’s CAPE ratio is 27, well above its median of 16. The rest of the developed world, meanwhile, averages a CAPE ratio of 17, below its median of 22.5, according to Research Affiliates." Chris Dieterich, International-Focus ETFs Beat U.S. Counterparts, Barron's, April 24, 2015.

For a thorough examination of issues associated with global stock market valuations, see numerous entries in the excellent blog Philosophical Economics, especially this one from August 2014.

Here's another look at an index of economic surprises, this one compiled by Bloomberg (Matthew Boesler, "The U.S. Economy Hasn't Disappointed Analysts This Much Since the Great Recession," April 23, 2015, Bloomberg Business) 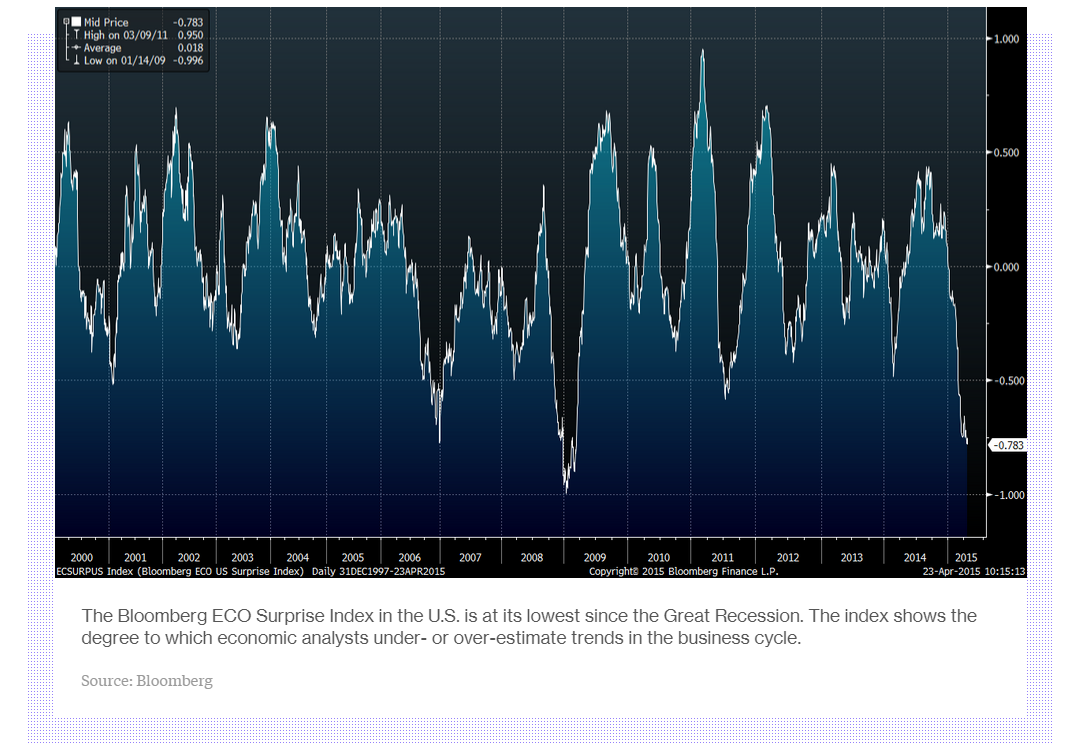