The Triumph (Crisis) of American Capitalism

This chart, put together by Andrew Smithers, shows the contrasting rewards to capital and labor over several generations. The blue line (left scale) is profits before depreciation, interest, and tax, as a percentage of output. The red line (right scale) represents employment costs as a percentage of output. After a fairly stable set of relations in the post-World War II period, reflecting the New Deal consensus, a yawning gap emerges in the 21st century. This is not your mother and father's capitalism, it would seem, but a system of political economy very different in salient respects.

The chart helps explain the relative out-performance of US equities as against world stock markets, noted in a previous post. The piece appeared in 2012, so the data is a bit old, but the disparity has probably gotten larger in the last few years. Smithers was bearish on the stock market in 2012 and, assuming mean reversion, believed shares to capital would recede and shares to labor would increase. Since publication on December 26, 2012, the U.S. stock market is up 54%. 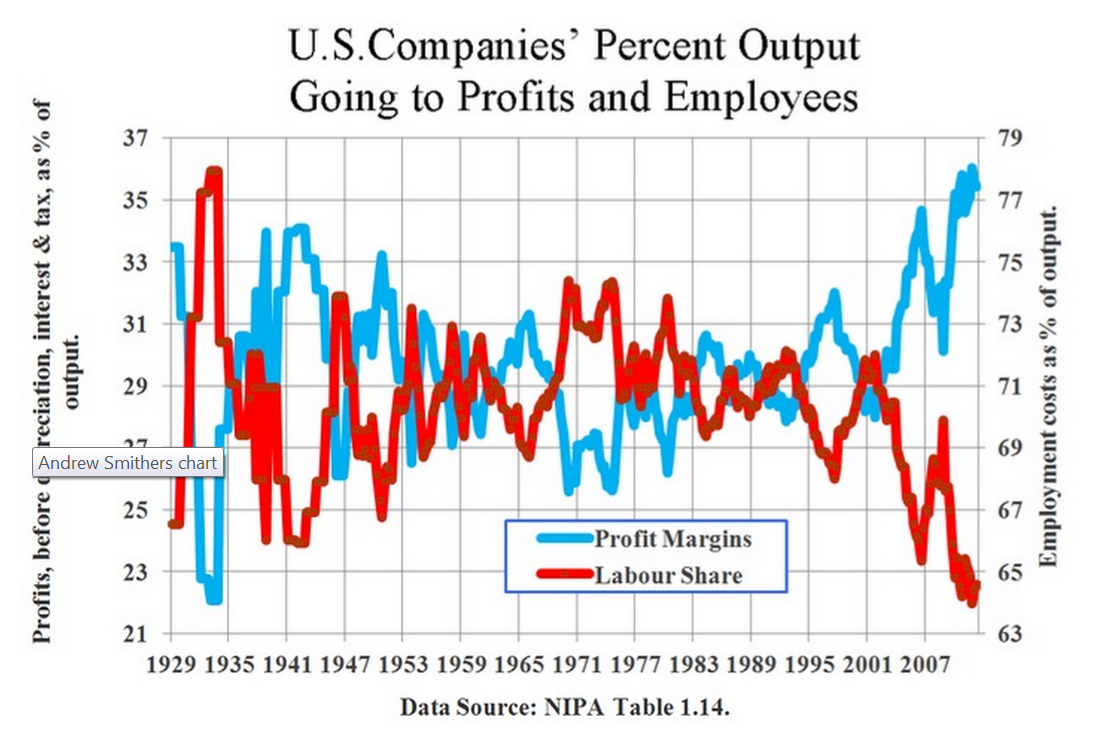 The chart appears in an NPR report introduced by Paul Solman, consisting of an interview between Jon Shayne and Smithers, a noted student of financial history.

ANDREW SMITHERS: All output is for somebody’s benefit, either those who work for the firm (the labor share) or those who provide the capital (the profit share). Labor’s share has never been lower or the profit share higher. These shares of course add up to 100 percent, before the government has taxed both labor and capital.

JON SHAYNE: What do you think has caused labor’s share to fall below its average to a new historical low, and capital’s share to rise to the higher highest peak ever?

ANDREW SMITHERS: The change in the way company managements are remunerated has been dramatic in this century. Salaries have ceased to be the main source of income to senior management, with bonuses and options taking over. There has been major change in management incentives and it should not cause surprise, though it evidently has to most economists, that management behavior has changed. The current incentives discourage investment and encourage high profit margins.

This is dangerous for companies’ long-term prospects as it increases their risk of losing market share and reduces their ability to reduce costs. It is very damaging for the economy, but it maximizes the income of managements. Senior management positions change frequently, so if management wish to get rich, they have to get rich quickly. I am not alone in this diagnosis. A recent report from the Federal Reserve Bank of New York comes to the same conclusion from a theoretical analysis as I have come from data analysis.

JON SHAYNE: How do bonuses today encourage profitability above investment? I guess you mean that they are tied to changes in earnings per share, or return on capital, rather than to the growth of companies’ output?

ANDREW SMITHERS: Yes, the current way in which managements are rewarded is perverse from an economic viewpoint. Adam Smith pointed out that some characteristics of human beings such as greed, which are often unpleasant at a personal level, can nonetheless bring social benefits. But this is not necessarily the case under current remuneration systems; greed is increasingly the cause of harm rather than help to the economy.

JON SHAYNE: On the graph, do we know how much of labor’s share represents what managers earn? If their share has gone up over the decades, through stock options and the like, which I believe is the case, then the average worker is getting even a bit less than it looks, correct?

ANDREW SMITHERS: Yes, there have been two major changes. First, the share of output which goes to all employees has fallen to its lowest recorded level. Second, the proportion of total remuneration that goes to the higher paid has shot up. Both of these changes have been bad from the viewpoint of the average worker. The result is that current management reward systems are producing both economic damage and social disquiet. . . .